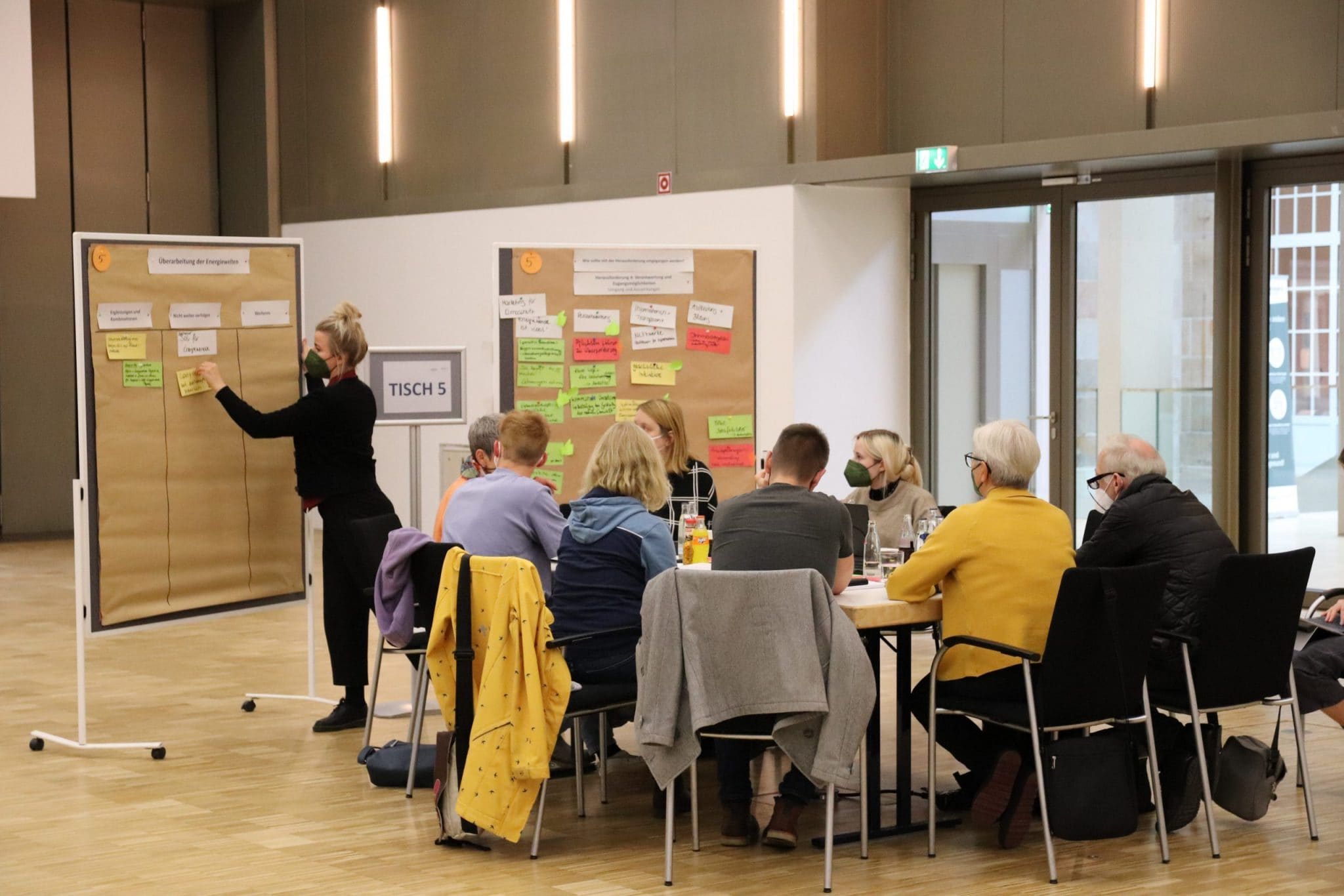 Climate targets do not guarantee success on their own. To achieve them, concrete measures and a joint learning process between science, politics, business and society are needed. In the Ariadne project, citizens have therefore been involved in the research processes on policy options for the energy transition through deliberation formats from the very beginning1Deliberation means “consultation”, “consideration”. A deliberation process is about people coming together under fair conditions, exchanging their different views and arguments, weighing them up and learning from each other. Joint decisions should not be based on majority voting, but on convincing arguments that are discussed together in a process of understanding..

The dialogue between society and science was initiated by the online discussions in which the participants discussed the problems and goals of the energy transition and what is important to citizens in its implementation. The results were incorporated into the Ariadne research and further deepened in co-creation workshops between science and people in order to identify focus areas for further research. In the next step, Ariadne researchers developed policy action packages which were discussed and evaluated at the citizen conferences in November 2022.

The results of the citizen conferences are incorporated into Ariadne’s further research work. Participants‘ assessments of the discussed policy instruments will be integrated into the further development of policy options that aim to maximize societal viability. The policy pathways will be presented at a citizen summit in 2023. They form orientation knowledge for policymakers, combining expertise on the impact of the instruments with the citizens‘ values and perspectives.

In November and December 2020, a total of 88 randomly selected citizens from across the country discussed in nine discussion panels what is particularly important to them for implementing the transformation of transport and electricity. In each session, people from a particular city or region met digitally. The aim of the online discussion rounds was to work out the diverse goals, priorities and needs, but also the challenges, concerns, conflicts and hurdles in shaping a climate-friendly transport and electricity sector. Of particular importance in the conversations were the underlying values and norms of the participants: Why are certain goals or challenges particularly important, and how can we jointly deal with different priorities and needs? The focus was thus on getting to know and understanding each other – between the participating citizens and with the Ariadne researchers.

The online discussions were recorded by the Ariadne team and the citizens‘ positions were subsequently structured into argumentative maps: Thus, the main points of the discussions were identified, and the corresponding arguments were gathered in the pros and cons. The aim was therefore not to determine the majority positions of the citizens, but to create an orderly overview of the most diverse opinions as possible. The discussions on the transport turnaround were divided into three main areas with a total of 16 topics. In the case of the power transition, there were also three focal points with a total of 20 topic areas. What is particularly important to the citizens was then reflected on with the Ariadne researchers on the basis of these overviews and integrated into the scientific work. The positions of the citizens were summarized in a report (in german only).

During the workshops, the Ariadne researchers introduced their research approach on the objectives and problems from the discussion rounds to the participants from the online discussions, and what answers they are working on. Participants were able to comment and ask questions. But scientists also had the opportunity to ask whether they had understood the positions of the citizens correctly or how, from their point of view, conflicting arguments or conflicting goals could be dealt with. The scientific community calls such a joint working process between researchers and non-scientific participants „co-creation“.

In two citizen conferences in November 2021, citizens were presented with policy paths for implementing the electricity and mobility transition, which were drawn from the focal points of the online discussions and the research results of Ariadne research. Around 50 people from across Germany came together to reflect in direct and personal exchange which impact the different political measures would have on individual lives but also on the community, and how they evaluate policy options for climate protection. For the group of participants, people from the online discussion rounds were invited again, as well as randomly selected citizens from all over Germany were contacted.

In the framework of the citizen conferences, the main aim was to shed light collectively on the effects of various measures, to record the assessments of civil society and to explore possible areas of agreement on concrete policy options that may exist despite differing values. Exploration modules (in german only) were used to start the discussions. The results of the citizen conferences were summarized in reports (in german only).

Upon completion of the citizen‘ conferences, the citizens‘ evaluations and assessments of the proposed policy alternatives are incorporated into Ariadne’s further research work. The advantages and disadvantages of the instruments discussed and identified by the participants will be merged into possible pathways to achieve the goal of climate neutrality in the sectors of transport and electricity. The policy paths will be presented at a citizen summit in 2023. They provide orientation knowledge for political decision-makers combining expert knowledge of the impact of the instruments with the values and perspectives of citizens.

Ressources on the following information are only available in german.

The app for the citizen conference on energy transition. Note: Tablet-optimized application – not usable on mobile devices.

The app for the citizen conference on mobility transition. Note: Tablet-optimized application – not usable on mobile devices.

Climate Change is becoming ever more important – despite the energy crisis

The transformation to climate neutrality is more important than ever to the people of Germany, especially against the backdrop of high energy prices. This is shown by the annual representative survey of more than 6,500 people nationwide on topics related to the energy and transport transition, carried out as part of the Ariadne project funded by the Federal Ministry of Education and Research (BMBF).

Ariadne researchers Arwen Colell and Brigitte Knopf explain in a standpoint what is needed for true social ownership in the process on the path to climate neutrality in 2045 and how deliberation can be shaped.

Link to the article

Information on climate-friendly electricity supply for work within focus groups.

Information on climate-smart mobility for work within focus groups.

Report: What is important to us in the mobility and energy transitions?

From public transportation to grid expansion, from electricity costs to jobs: Across Germany, people have discussed the expansion of renewable energies and the mobility of the future. What moves them and how Ariadne continues to work with these perspectives is shown in the new report.

Social Sustainability Barometer of the Energy and Transport Transition 2021

More than 6,800 people across Germany were surveyed: Almost 80 percent see the transformation as a collective task to which everyone should make a contribution to succeed. However, more than half describe the implementation of the energy transition as expensive or distant from citizens and would like to see more momentum. The first results of the Social Sustainability Barometer 2021 are now online and available to download.

Deliberation means “consultation”, “consideration”. A deliberation process is about people coming together under fair conditions, exchanging their different views and arguments, weighing them up and learning from each other. Joint decisions should not be based on majority voting, but on convincing arguments that are discussed together in a process of understanding

What does citizen participation mean in the Ariadne project?

In the Ariadne project, citizens are involved from the very beginning and throughout the entire course of the project on issues related to the energy and mobility transitions. There is a continuous alternation between citizen events, such as the online discussions and the citizen conferences, and Ariadne research phases. The focus is on a common understanding of the challenges and solutions of the energy transition.

Can I register for the events, such as the citizen conference?

Citizens cannot register themselves for one of the participation formats, but are invited on the basis of a lottery procedure. For this purpose, people are randomly selected from the population registers and compiled on the basis of population data in order to obtain a most representative picture of the population as possible. These people are then invited and can register for the various formats. For the citizen conferences and the citizens‘ summit, participants from the previous participation formats can also register again.

What is special about the Ariadne project?

In the Ariadne project, the citizens‘ perspective plays an important role from the very beginning, since the results of all participation formats flow directly into the Ariadne research. The overall result is that the project provides policymakers with options for action that both reflect the results of scientific research and are endorsed by society.

My question is not listed here, who can I contact?

What else is there?